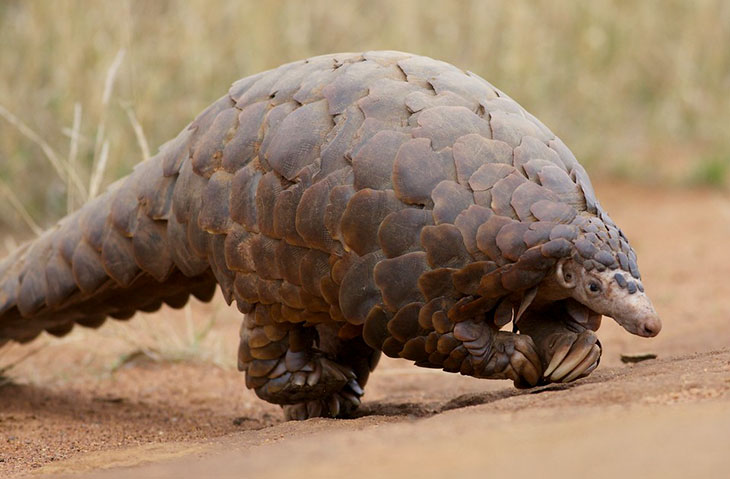 Pangolins are small animals found in Asia and Sub-Saharan Africa. While they might look like simple creatures, they have a unique built-in defensive system to help protect themselves from danger.

What Does a Pangolin Do When Threatened?

A pangolin has a very interesting weapon it uses to protect itself against predators – its scales. When they feel threatened, this animal will roll up into a small ball. In fact, this defense system is what gives the pangolin its name which means “one that rolls up” in Malay.

Because its outer body is covered in scales, the pangolin is usually safe from most predators. This is due to the scales being somewhat difficult for predators to bite through thanks to their thickness and sharpness. Another way a pangolin safeguards itself is by whipping its tail toward the threat and hissing at it.

What is Pangolin Skin Made Of?

Pangolin skin is made up of tiny keratin scales. Keratin is a form of protein found in most mammals, including humans, that helps to protect the skin and hair growing in it. The scales are somewhat heavy and are believed to be about 20% of the pangolin’s weight. These scales come in various colors that range from brown to olive and vary in their sharpness depending on where they are located on the pangolin’s body.

Despite them being large, the scales aren’t troublesome for the pangolin who can easily walk around with them. The scales will periodically fall off of their body and regrow.
The pangolin’s skin also varies depending on where it is located in the world. For instance, Asian pangolins tend to have hair growing on the scales while African pangolins don’t.

The pangolin has quite a few predators but the main ones are tigers, lions, and leopards. These large animals tend to have strong jaws compared to other species resulting in them having an easier time tearing up the pangolin. However, even the strongest lion can spend hours trying to eat a pangolin to no avail.

Hyenas will occasionally prey on pangolins, but this isn’t often as hyenas have even more trouble trying to break into the pangolin’s shell compared to the powerful felines. Because the pangolin’s scales are so strong, a pangolin can easily defeat its predators and leave the fight with nothing more than a few scratches on its scales.

While not a typical pangolin predator, ants can be very troublesome. This insect will sometimes climb up into their ears and nose which can cause extreme discomfort for the pangolin. To help prevent this, the pangolin will tighten the muscles around its ears and nose to stop ants from biting their body.

Can a Lion Kill a Pangolin?

Yes, a lion can kill a pangolin but even this majestic creature can have trouble breaking through its thick protective layer. The lion will use its powerful jaw muscles to try clenching on the pangolin so it eventually opens its body up and can feast on the meat inside.

While not completely bulletproof, the pangolin’s scales can help protect it from objects that might pierce its body. In fact, the design of the scales has helped scientists create bulletproof vests for humans.
If the pangolin’s scales are damaged they will quickly heal themselves to better protect the animal. Some might also fall out and then quickly regrow to help the pangolin safeguard itself from future attacks.

Are Pangolins and Armadillos Related?

Pangolins and armadillos are slightly related but pangolins are closer to dogs and cats than the armadillo family. Armadillos tend to be larger and weigh more than pangolins.
Unlike armadillos, pangolins live in trees and burrows while armadillos live on the ground. Another major difference between the two is their defense system. While pangolins will roll up into a ball to protect themselves, armadillos will dig holes and hide in them.

Why are Pangolins Being Poached?

Pangolins are a favorite poaching target for a few reasons. One of the main causes is because of its scales. Despite them being endangered, many people hunt for pangolins because they believe their scales contain impressive healing properties, such as preventing arthritis and curing cancer.

Many Asian countries, such as China, also serve pangolin meat as a delicacy making it a sought-after meal for many. In addition to this, the meat is believed to have a massive amount of nutrients that aid the kidneys.

While numerous laws have been passed to help protect the pangolin there is still a large illegal pangolin trade operating causing this animal to be somewhat at risk for extinction.

What Other Animals Has Strong Armor Skin?

There are a handful of other animals that have strong armor skin. This includes hedgehogs, armadillos, and porcupines.

Hedgehogs are known for their sharp quills that provide extra protection from prey. If this animal senses trouble, they will roll up into a ball so that their body is completely covered in the quills. This protects weak spots, such as their face, from predators. If the predator tries to pull at the quills, they will not only be surprised with sharp pokes, but find that the quills are very difficult to remove.

As mentioned above, armadillos have similar armor skin to pangolins but there’s a slight difference. Unlike pangolins that have thick scales overlapping each other, the skin of armadillos features bone-like plates that grow next to each other. While their plates can help to protect them, armadillos will also use their claws against predators.

Porcupines have very prickly quills that they release from their body to quickly deter predators. When the predator tries gripping onto the porcupine’s body, the quills will end up getting stuck into their face resulting in a very painful problem.

Pangolins are some of the world’s most intriguing animals and can only be found in Asia and Africa. They are created with an interesting defense mechanism that can thwart many animals in nature from preying on them, including powerful lions.