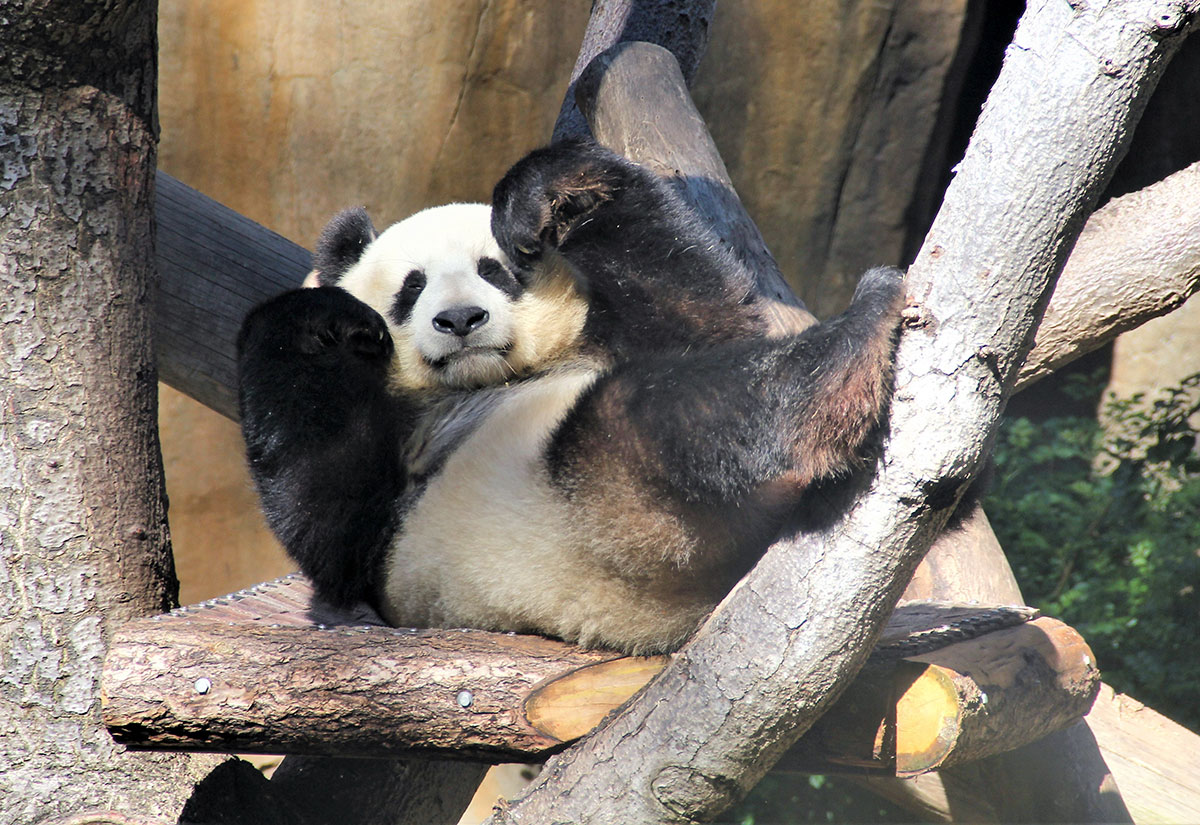 Clowns usually have very colorful faces. Pandas are the monochromatic variant. The internet is choc full of videos of these black-and-white bears tripping and falling all over their zoo enclosures. Though majestic, they are anything but graceful.

Physically, pandas are not well suited to exist. This isn’t a joke, there are many qualities of these majestic bears that don’t make it seem likely that they’re meant to survive. We can’t deny that they’re awkward and predisposed to be.

Physiologically, they’re lazy. They eat and sleep all day long and hardly show an interest in mating. Already given a slow start, some vital body parts don’t quite help their case.

They may not be all thumbs, but they do have 6 digits on their hands, one of which is on their wrist and mimics a thumb (though it’s not opposable).

These extra appendages help them gobble up bamboo. It also helps them to climb, sometimes scaling up trees, relying on their powerful forearms to avoid the rare predator.

Because they spend lots of their day lazing about or climbing, their leg muscles aren’t nearly as strong as their forearms. When they do actually move, they can’t rely as heavily on their legs. It’s not so surprising then that they’re a bit clumsy, with how unevenly developed they are.

Their eyesight also sets them up for failure. Pandas are nearsighted. In the wild, they don’t need to see too far because nobody could see very far when living in a bamboo thicket. This could be one reason why they look like they’re stumbling around in the dark … because they are (even in the light)!

Clumsy is in the eye of the observer. What does it mean to be clumsy? How do we know the pandas aren’t acting like this on purpose?

All the evidence we have of pandas falling out of trees and over each other comes from zoos where pandas are exposed for the first time to so many social interactions.

In the wild, mothers only rear one cub and don’t usually hang around other bears. In captivity, panda cubs in the zoo have siblings and have learned to play.

A cub falling out of a tree is like a human child jumping off a jungle gym.

In the rare occurrence mating season comes around and a panda actually puts down his bamboo to indulge in some social activity, he does some warm up routines.

Believe it or not, pandas exhibit athletic behavior such as somersaulting and wrestling to use as ice breakers. Depending on the season, behavior like this can be misconstrued by zoo-goers thinking that the bears are just cute, clumsy pandas.

We like to think that pandas don’t get hurt when they fall, otherwise they’d stop doing it! In most cases, a downed panda gets up and walks away after a fall. They tend to roll over and keep going about their business.

It’s highly unlikely they hurt themselves badly. Starting from a young age, their dangerous adventures will help build up a tolerance. Their thick hair must help, too.

Some people say clumsy, but sometimes the right adjective is playful. Mankind will forever be trying to find explanations for bizarre behaviors, working off what they already know: themselves. When we consider how drowsy and slow these bears are, it’s not surprising that their energy levels can only handle so much fun.