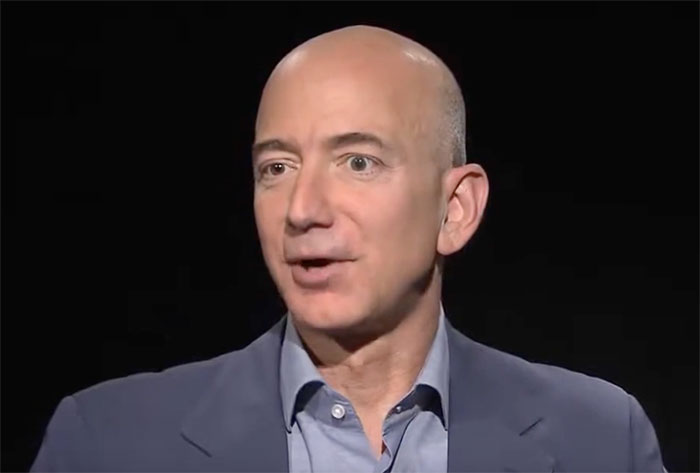 Undoubtably one of the most famous people in the world today, Jeff Bezos’ name is a buzzword across news networks and media outlets.

He is regularly praised for his modern innovation and condemned for questionable business practices. Sometimes, the criticism gets personal, though.

Apparently founding the world’s biggest online retailer and his own aerospace company isn’t enough to hide his appearance. Many have wondered for years what it is about Bezos’ right eye.

It’s hard to be completely certain what is wrong with Jeff Bezos’ eye. He has never publicly acknowledged its unusual appearance nor commented on why it looks different to his left.

The billionaire’s silence doesn’t prevent us from working out what exactly it is that makes it raise so much debate. In fact, it’s relatively easy to determine what causes Bezos’ eye to look different based on the type of physical ailments common to eyes.

Is it a fake eye?

A fake eye, or prosthetic eye, is an artificially crafted eye to replace an empty socket. They’re made for people who lost an eye due to injury or infection.

Back in the day, they were actually made of glass, but in modern times they are usually acrylic. While they are carefully painted to resemble a real iris, no prosthetic can replace the real thing.

It’s obvious that Jeff Bezos does not have a fake eye. Watch any interview with him and you can immediately see that his right eye moves in conjunction with his left as his expressions change.

Despite being worth almost $200 billion, we don’t think he’s managed to get a robotic eye that syncs up with his natural one fitted, although that would be very cool and very helpful to many other people.

Is it a lazy eye?

A lazy eye is a common defect that develops early in life, usually starting in children between three and five years old.

If caught early on, worse problems in the future can be prevented. Contacts, glasses, and patching therapy are all used to fix a lazy eye.

While not much is known about Jeff Bezos before he entered the world stage, especially his formative years, he has never been pictured with treatment in the form of glasses or a patch – which would be pretty useless anyway, as such treatment is most effective in one’s youth.

What’s more, Bezos doesn’t seem to have any of the stereotypical symptoms associated with a lazy eye.

Both of his eyes move in unison with one another and his right eye doesn’t seem to wander off in another direction.

He also doesn’t tend to squint or shut his right eye nor tilt his head to one side as if to compensate, meaning that it’s highly unlikely that he has a lazy eye.

Is it a droopy eye? 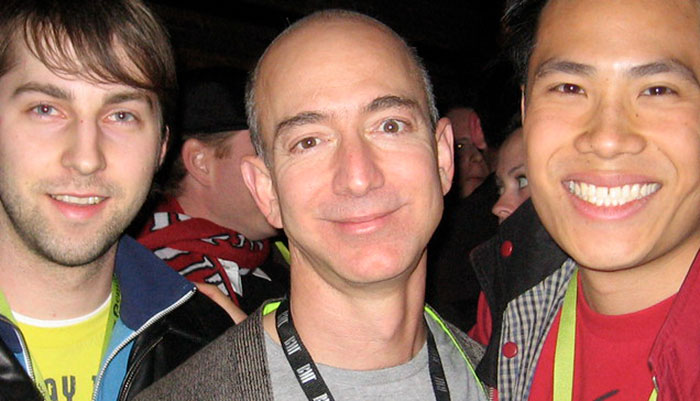 Having crossed out all our other options, it is most likely that Jeff Bezos has a droopy eye.

What’s the difference between a droopy and lazy eye?

Having a lazy eye is a condition that affects the eyeball itself and how its muscles work (or don’t).

Having a droopy eye, though, has nothing to do with the eyeball itself. A droopy eye, formally known as ptosis, concerns the skin and muscle in the eyelid.

Someone either has too much skin and/or the muscles controlling the eyelid aren’t strong enough to hold it taut.

What causes a droopy eye? 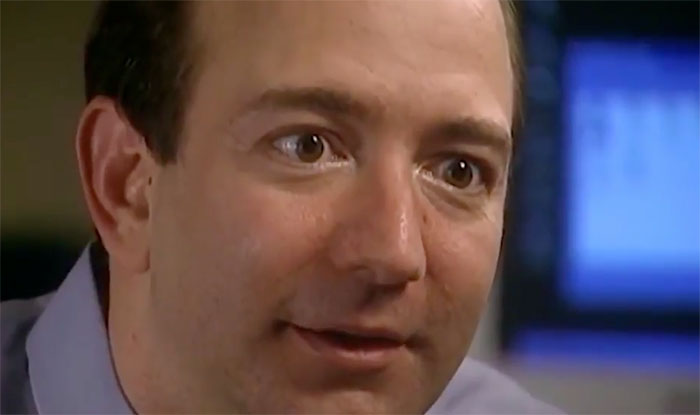 Also unlike a lazy eye, a droopy eye can develop at any point in one’s life. It can happen in babies, children, teens, and adults. It can be present before birth, be the result of injury or disease, or be caused by the normal ageing process.

Some of the diseases or illnesses that can cause ptosis include diabetes, a tumor, stroke, or a stye; however, most droopy eye cases are simply due to ageing, without any more sinister underlying cause.

This is most likely how the peculiarity developed in Jeff Bezos.

Early photos of the billionaire suggest a slight squint to his right eye, but nothing near to his current condition, making it most likely that old age is having the greatest impact on Bezos.

Can surgery fix a droopy eye?

It is possible to fix ptosis using surgical treatment. The procedure is called blepharoplasty and there are two reasons to get it: superficial and physical.

If one wants to remove the appearance of a droopy eye, it’s possible to have surgery to fix the eyelid to make it look less droopy.

In severe cases of ptosis, though, blepharoplasty is necessary to prevent the drooping eyelid from interfering with one’s vision, suggesting that people with mild cases can live relatively unaffected by the condition.

Is there surgery to fix a lazy eye?

Even though it’s likely we can rule out Jeff Bezos having a lazy eye, it’s good to know that it is a fixable condition for others – if it’s taken care of in childhood, that is.

Some professionals agree that after 10 years of age it’s unlikely a child can recover fully from a lazy eye, even with treatment. If caught early, the first recourse is patching therapy.

The child is meant to wear an eye patch over their good eye, forcing their lazy eye to work harder and learn to move normally so that it naturally fixes itself. If the condition is severe, though, surgery can fix a lazy eye.

In this case, a child is put under general anaesthetic for up to two hours during which time doctors detach and reattach the muscles in the eye so that they can function properly.

After surgery, the child may have to wear an eyepatch over the concerned eye for 24h, but are otherwise recovery is swift!

Jeff Bezos has never hinted at being hindered by his right eye and it is pretty common for people to live with droopy eyes without needing treatment or surgery. If it really is a droopy eye – or even lazy eye, or something else – his right eye certainly hasn’t prevented the billionaire from envisioning greatness.

Does Ryan Gosling Have a Lazy Eye?