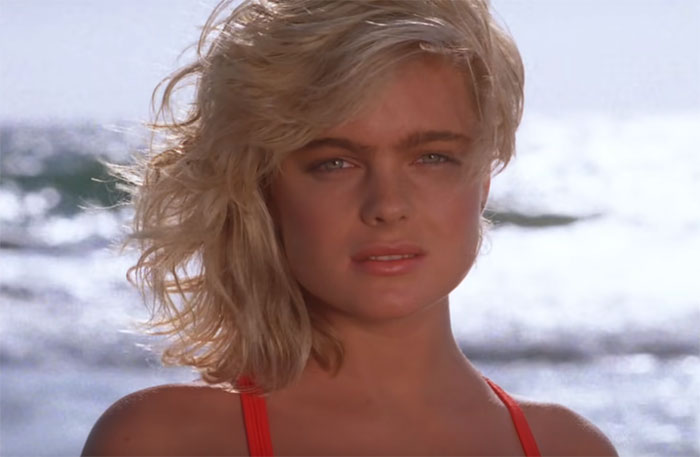 In Glendale, California, Erika Maya Eleniak was born on September 29th, 1969. She is an actress, former model, and Playboy Playmate.

This 5’ 61/2” (1.68 m) actress has been active in the entertainment industry since she was ten in 1982. Her father, Dale Alan Eleniak, is of Ukrainian descent, and her mother, Iris Maya, is of Estonian and German descent. She is also the niece of actor Eddie Carroll. She has four sisters and one brother.

Erika started acting at an early age doing school plays and theater. She starred in her first national commercial when she was 10 years old for a Star Wars Underroo spot alongside Anthony Daniels as C-3P0. 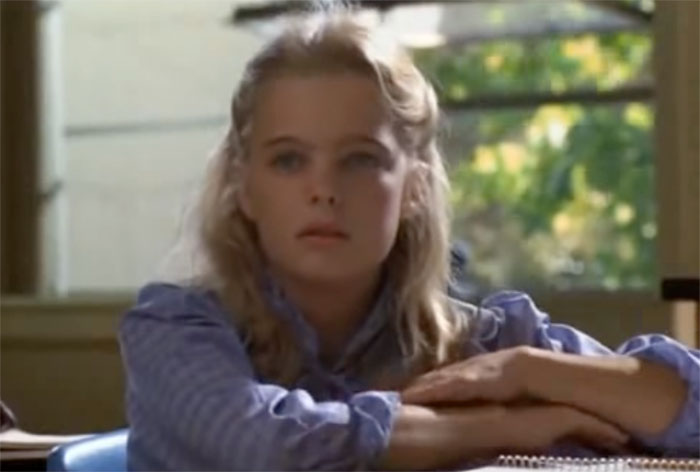 Her next big break came in 1982 for the film E.T the Extra-Terrestrial. This Steven Speilberg film would be hugely successful. She had a minor role as the girl kissed by Elliot (Henry Thomas). Though it was a small role, that film was an important start to her career, one of the biggest box-office earners.

Erika mentions on a podcast the she got the role after being spotted by a talent scout while performing at a showcase at the Debbie Reynolds acting studio.

Her next significant role would not be until 1988. Before that, she made minor one-episode appearances on Silver Spoons and Still the Beaver. Her next notable role would be as an adult in the remake of The Blob, where she played Vicki De Soto, one of the victims of the titular blob.

Was Erika Eleniak on Little House on the Prairie?

Erika Eleniak was never cast in any version of Little House on the Prairie. Rumors of this may be a situation where she was confused by fans and viewers for other actresses who were, such as Melissa Sue Anderson, who played the character of Marie Ingalls on the show. 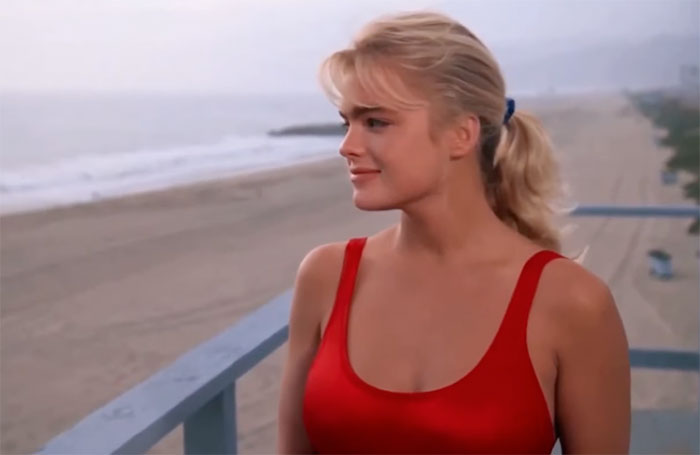 However, she would be best known for her role in Baywatch, starting with the Baywatch pilot movie Baywatch: Panic at Malibu Pier in 1989. Erika was one of the first cast members of the classic beach-set soap opera, playing the character of Shauni McClain from 1989 to 1992.

Why did Erika Eleniak quit Baywatch?

When she started her run on the show on NBC, it was a markedly more conservative network, but Baywatch changed that after being revised and syndicated. On a podcast Erika mentioned that she was uncomfortable with the direction the show was going and wanted to focus on having a serious acting career.

"I wanted very much to have a serious acting career. I feel like when we did Baywatch the first year, it was on NBC, which was the most conservative network at the time right. We had to be by the book for sponsorships and when the show went down after the first year and then resurfaced and went syndicated, you know there was a lot more creative license to drop necklines and do Brazilian cuts. And then it became what it was….it became the international phenomenon, but for me as an actor, I was like okay, that’s a lot and I think we were kind of constantly battling with each other in terms of what they thought was sexy what I thought was sexy. I was always kind of trying to cover myself up and that was very irritating on the set."

The arrival of Pamela Anderson to the show made a natural transition point for Eleniak to quit the show and pursue her interest in film acting.

"Pamela Anderson came on and she was everything that they wanted for the show and nobody did it better than she and for me I was able to go." 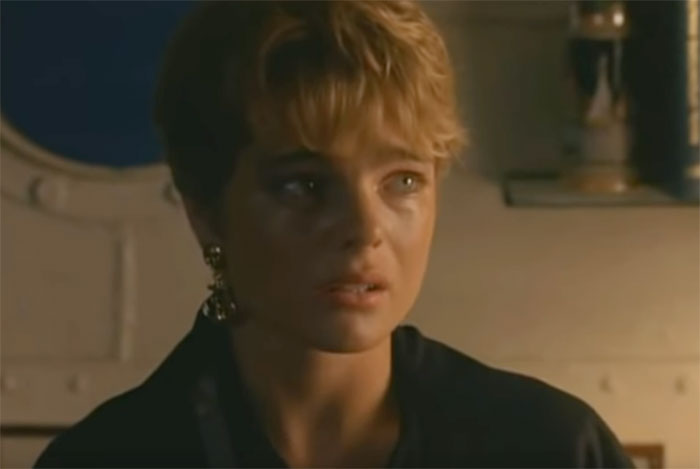 After leaving Baywatch, Erika landed her breakout role in the 1992 Steven Seagal film Under Siege.

In the movie, Erika would play the part of Jordan Tate, a model hired by the villains to distract the crew while they plotted to take over the battleship. She ultimately gets rescued by Steven Seagal and helps him take back the ship.

The movie was a breakout hit and earned $156.6 million at the box office on a $35 million budget and it catapulted Erika’s name into the mainstream consciousness.

Did she date Steven Seagal to get the part?

There have been rumors that Erika Eleniak was cast in Under Siege due to being involved with lead actor Steven Seagal. This mainly was due to an interview with Pamela Anderson, who claimed she lost out on the role for refusing to give into Seagal’s advances. Erika Eleniak would end up taking that role.

Other allegations would come out against Steven Seagal. For example, from the same article, “two women claimed that they were sexually assaulted by the American actor, which he vehemently denied. Regina Simons and Faviola Dadis detailed the alleged assaults at a press conference with their attorney Lisa Bloom.”

As for Erika Eleniak, she claims no such thing happened, at least with her, stating: “I’ve never been assaulted, I’ve never been raped,” she said. “… We should be able to go to work without feeling pressured or uncomfortable. Have I ever been made uncomfortable? Yes. Has anyone tried to pressure me? Absolutely.” 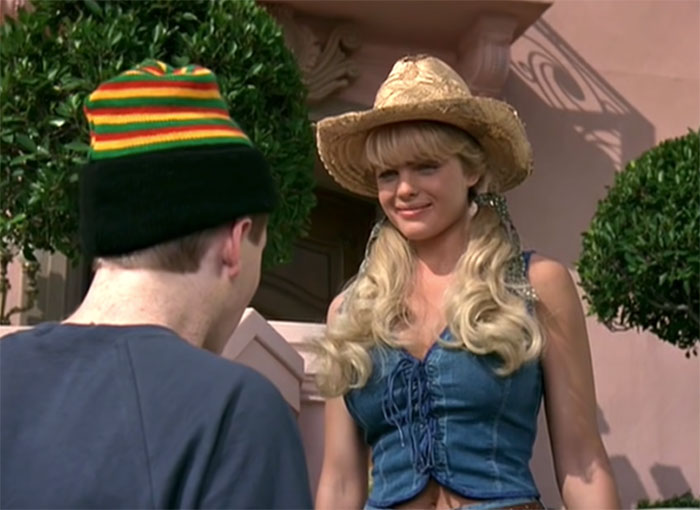 After the success of Baywatch and Under Siege, in 1993 she Erika would be cast as Ellie May Clampett in The Beverly Hillbillies, a modern spin on the 1962 television show of the same name.

The movie follows a family of hillbillies from Arkansas, who strike it rich from oil and move to Beverly Hills.

Erika mentioned on a podcast that playing Ellie was one of her favorite roles in her entire career. She mentions that she had to get a dialect coach to produce that Arkansas drawl and she said she was blessed to work with so many good actors on the set, including Jim Varney, Diedrich Bader, Cloris Leachman, Lea Thompson, and Lily Tomlin. 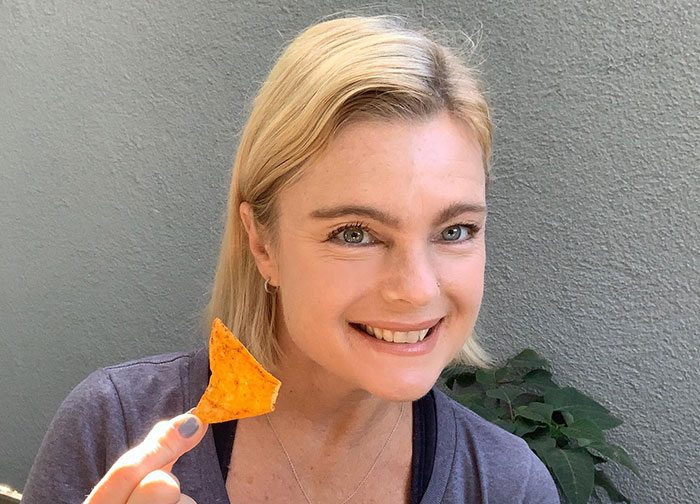 For a time, Erika Eleniak was on a VH1 reality series titled Celebrity Fit Club (2006), where she struggled with weight loss. She had just had her daughter and had developed a form of body dysmorphia brought on by childbirth, though she may have had weight anxiety throughout her youth.

One of her interests is podcasting and spirituality. She started a podcast called Spiritual Alchemy with Erika, where she covers topics regarding spirituality. The podcast does not seem to have updated since November of 2020, so she may be taking a break.

Erika Eleniak is still acting, though. She took a break from acting between 2012 and 2017 but came back with an appearance in Boone: The Bounty Hunter. In 2022 she has three projects in production, including one where she will be playing Marilyn Monroe.

What about her relationships?

Erika Eleniak was engaged to her Baywatch co-star Billy Warlock during the production of the show. However, that did not last. Similarly, she was also engaged to actor William McNamara, her co-star from Chasers (1994), for a time.

She would later meet bodybuilder Philip Goglia and date him for a time. The two would marry on May 22nd, 1998. However, the marriage ended in divorce six months later.

After filming the 2001 Snowbound in Calgary, Alberta, Erika Eleniak would meet Roch Daigle. He was a key grip who worked on the set of the film. Shortly after purchasing a home in Calgary, she dated Daigle. They would marry later that year and have been together since.

Did she have kids? 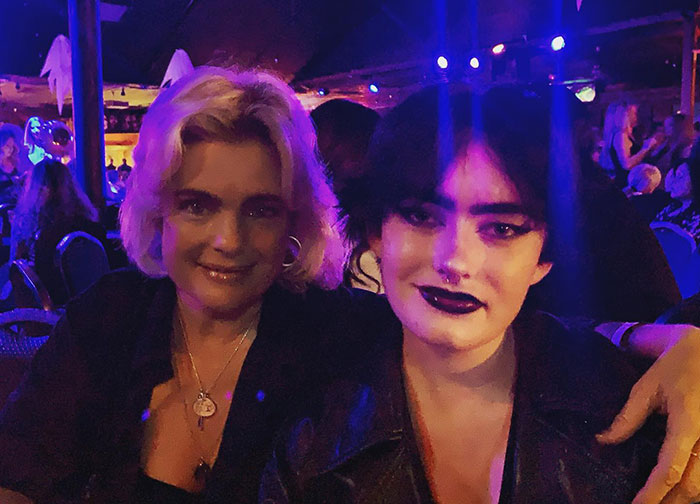 Erika Eleniak would eventually become pregnant with her partner Roch Daigle. Unfortunately, their first pregnancy in 2005 was discovered to be ectopic and resulted in a miscarriage.

However, a year later, Erika would become pregnant again and have her and Roch’s daughter Indyanna Daigle in January of 2006.

Like many celebrities, Erika Eleniak can be found on social media to connect with fans and promote her work. She is mainly found on Twitter and Instagram.