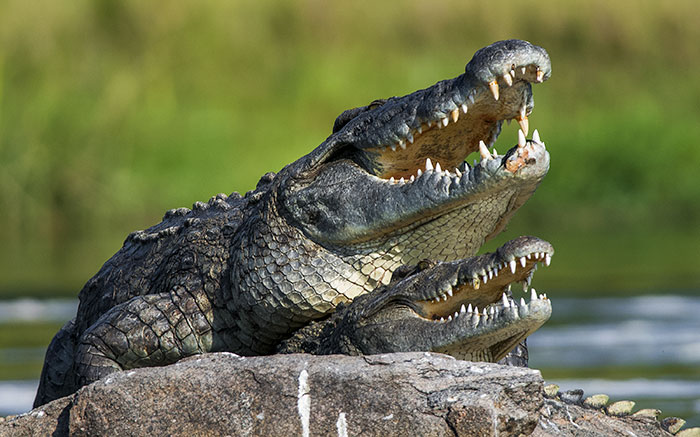 There’s just something about crocodiles. Are they immortal? Are they vestiges of the dinosaurs that once walked the earth? People are curious about these creatures who can go from chill to deadly in a second. A common question people have about crocs? How they mate. If you’re someone who’s wondered that, you’ve found the right article because we’re going to break down exactly that today. Spoiler alert: Elton John was right. Crocodile Rocking is something shocking!

The breeding ritual begins with the male crocodiles choosing a territory. Once he’s picked the perfect spot he will put on quite the display . The male will slap the water with his snout and tail to get females to notice him. Like most species, the male seeks to make himself look like a worthy mate by accentuating his strength so lifting his chest is a common way to say, “Hey, look at me.”
Females check things out and engage in head rubbing before deciding on a worthy mate.

How do Crocodiles Mate?

Once a female has let a male know she’s game, they swim away and he either mounts her or swims alongside her lining up their sex organs. The male crocodile’s penis is about 10 centimeters, retractable and always erect. When ready it shoots out of his body for a few minutes and then, just as quickly, retracts.

Yes, croc mating is highly efficient. A male and female will engage in sexual activity a few times during the season to increase the chances of her eggs being fertilized, in this sense they are monogamous.

The pregnancy lasts four to six weeks and ends with about 50 eggs which incubate for about 80 days.

Welcome to the World, Little Crocodiles!

One of the coolest things about crocodile mating is that the unhatched crocodiles make squeaking noises likely to sync the timing of their emergence to each other and the female. Once born they stay with their mother for quite some time, and are incredibly vocal with her especially when they sense danger.

Baby crocodiles do sometimes get eaten by other crocodiles who are not discriminating when it comes to food choices. Even when those choices include cannibalism.

Crocodiles are fascinating and mysterious creatures. Because they mate in the water and release cloudy pheromones while doing so scientists have not come to fully understand the procedures of copulation. Interestingly, in captivity the breeding seasons are about a month behind wild crocodiles of the same type.