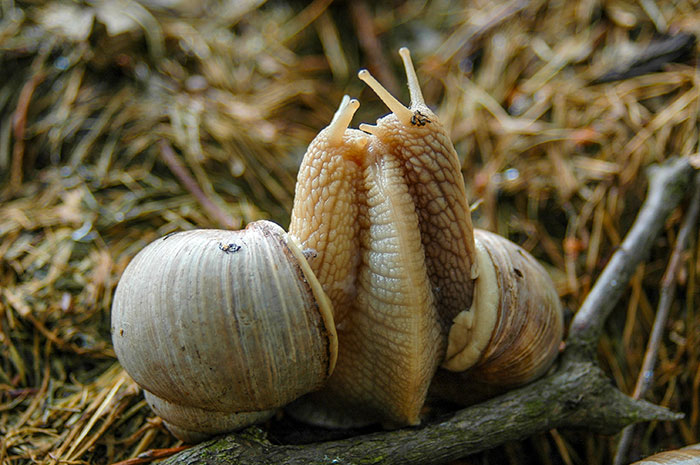 Most snails, including the commonly known garden snail, are hermaphrodites. This means they contain both male and female reproductive organs and produce eggs and sperm. The pomatidae family is the exception, in which males and females are separate, denoted by a smaller and larger shell, respectively. Although in species that host both parts the snails are capable of self fertilization, or asexual reproduction, they will still often mate with another snail.

At the base of the body and below the head, the reproductive system ends in an opening called the genital pore.

How do snails find a mate?

When snails are mature enough to reproduce, they will find a partner primarily through smell and touch. Their olfactory system is sensitive to chemicals in the air that indicate whether their counterpart is receptive to mating. They will often follow a mucus trail left behind by a prospective mate and once they find this fellow snail, the courtship process can occur from anywhere between 2 and 12 hours. The process begins with the two snails touching, usually with their tentacles, and sometimes a biting of the other’s genital pore.

What happens when snails mate?

In the last stage of courtship, before mating begins, the snails use a technique involving their “love dart,” technically called a gypsobelum. This title describes a structure of calcium or chitin only seen in mature snails. These anatomical parts earn their name from their comparable appearance to an actual pointed dart.

Both snails partaking in courtship have a “love dart,” which, when close enough, they will shoot into the soft body of the other snail in order to create union. This can be a risky action as it is possible to pierce an internal organ. If amplified to human scale, these darts would be similar to the size of a 15 inch knife. They can leave relatively large punctures in the snail, but these animals are adapted to the process.

The “love darts” are not used for the transfer of sperm but were found to be a form of sexual selection. Garden snails were observed having a mucus on these structures that can increase the likelihood of successful reproduction- the snail with the ‘better’ injection is more likely to fertilize the eggs of the other, releasing hormones that prevent the receiver of the “love dart” from killing newly introduced sperm as well as boosting their own sperm’s efficiency.

How do snails get pregnant?

This “love dart” injection occurs about half an hour before the beginning of the copulation process. Since they are hermaphrodites, the transfer of sperm can be reciprocal and depends on the species. Often both snails will receive sperm and thus grow eggs within, burying them separately approximately three to six days after being fertilized. The snail will use its “muscular foot” to shovel dirt and build a nest for anywhere between 30 and 120 eggs. The average number of eggs in a garden snail nest is 86. Eggs are only 1/8 of an inch in diameter and are covered by a concoction of mucus, soil, and excrement created by the parent snail.

After laying the eggs, called oviposition, snails are usually ready to reproduce again in six weeks, starting the whole lengthy process again! Their reproduction is affected by environmental conditions. When these are optimal, warm weather and high humidity, snails can reproduce as often as once a month. Though seemingly unassuming creatures, these frequently seen animals are anything but common in their anatomy and reproduction.