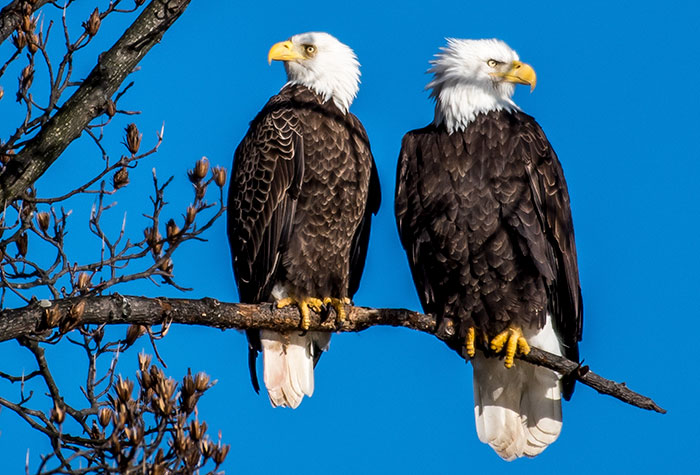 If you’ve been reading our recent posts about animal mating but found the sexual habits of hippos and snails a little disgusting or the behavior of male ducks downright disturbing, then this next article will come as a relief. Bald eagles are much more romantic in their sexual attitudes, beginning their courtships in extravagant and moving dances in the air, and then bringing up their offspring as loving and monogamous couples. They are one of the few animals whose love lives really do seem romantic and affectionate, rather than alien and terrifying.

In fact, bald eagle courtship rituals aren’t just a way of attracting a mate, since they often continue after a male and female have paired up. They also appear to be a way of deepening the bond by further demonstrating the ardour and prowess of each bird. They are also spectacularly beautiful for those who are lucky enough to witness, since they mostly take the form of aerial avian acrobatics.

One of the rituals has been called the rollercoaster flight, as it features one eagle climbing high into the sky and then tumbling vertiginously down, before repeating the daredevil stunt enough times to impress its potential mate. But its fitting that the most famous of this romantic bird’s rituals is one they perform together. The cartwheel courtship flight –glimpse it here:

You will see both eagles fly almost as high as they are able to, then clasp each other’s talons and tumble through the sky while spinning death-defyingly around each other, only breaking apart at the last possible moment.

What exact traits each eagle is seeking in these displays is ambiguous. Bald eagle expert Bryan Watts, director of the Center for Conservation Biology, says all we have are “fragments of information”, but it seems likely that Darwinism is at work, and that the eagles may be displaying their mutual fitness for selection by displaying the kind of fearlessness that would come in handy when defending their young. If this is evolution at work, then it is evolution at its most creative and beautiful.

Once the extraordinary airborne courtship is over and the bond confirmed, the couple don’t rush straight into mating like most animals. Next comes the less spectacular but perhaps most meaningful phase of the entire relationship: nest-building. Both birds will work together to create a nest, sometimes dividing up the labour with female as nest builder and male as material gatherer. Rather beautifully, the final piece of the nest is a delicate lining of grasses and straw and an egg cup of soft plant material which the male and female may forge together, possibly as another final intimate ritual of courtship. If this makes you think of newlyweds decorating a new room for an expected baby, you wouldn’t be the only one.

How Do Bald Eagles Mate?

In some cases, new bald eagle pairs will not mate during their first year at all, and have been known to spend much longer in one location before taking that step. Whether this is to assess each other or to assess their nesting area being unclear. This patience is again rather exceptional in the animal kingdom, but once everything is at last decided the act of consummation can finally take place. It is, for practical reasons, more earthbound than the aerial displays of the early romance, taking place either in the newly constructed nest or a nearby branch. During the mating act, the two pair connect through their cloaca – the avian equivalent of genitals – and sperm is transferred through what is sometimes described as the cloacal kiss. This will often happen repeatedly during a honeymoon period that can last for days.

Between 5 and 10 days after a successful coupling, the female bald eagle will lay 1 to 3 eggs, with a day or two in between each laying. The chicks almost always hatch in the order they were laid. Once they are out in the world, the eggs must be protected fiercely from predators (something the powerful and fearsomely taloned bald eagle excels at) and incubated constantly to be kept warm. While this is a childcare sharing arrangement, with both parties taking turns to incubate over the 35 days the chicks take to hatch, it generally tends to be the female who will spend longest sitting atop the egg, while the male is out hunting more often. Well, we never said bald eagles defied all gender stereotypes.

Once hatched, the juveniles have a ferocious appetite, and both parents will take turns hunting to feed them. Chicks don’t need their food regurgitated, and will happily tear into raw meat. As a result of their large intake of protein, they grow fast and are ready to fledge – the beautiful term for a bird taking its first flight – by around 10 to 12 weeks of age.

However, unlike other birds, just because the chick has – literally – flown the nest, doesn’t mean that the parent’s job is over. Bald eagle fledglings will often stay very close to their birthplace for up to six months, and for at least the first three of those months the parents will still feed them. Learning to hunt from the air is an incredibly challenging skill to master, and the parents take their time teaching their offspring how to survive this way. Only once they are six months old, and reasonably skilled hunters, will the now adult eagles fly away into their future, which usually means four or more years of nomadic single life before it is their turn to take up amorous acrobatics.

As for the parents, now that they are successfully paired, the bald eagles will typically remain married and monogamous for the rest of their lives. The longer they are together, the more they will repair and finesse their nest.They may even make an alternative nest as a kind of second home, allowing the other to air out for one season at a time. These nests become ever larger and more elaborate over time, a physical manifestation of years of fidelity.

It’s true that there are some cases where eagles will enter into more polyamorous arrangements, such as triads where a male will take two wives and all three will contribute to the upbringing of chicks. These aren’t the norm, however, and it’s much more often that you will find bald eagles remain in a traditional marital arrangement for the rest of their lives. Less than 5% appear to “divorce”, much less than the national average among humans. Bald eagles may not say marriage vows, but it appears they do believe in til death do us part.

What Animals Sleep Standing Up?5 Animals That Get Drunk In NatureWhy Are Pandas Bad At Mating?