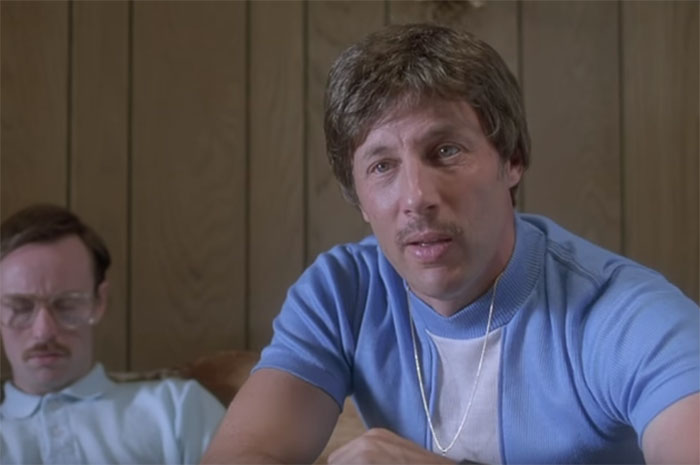 There are some actors with Hollywood resumes that are a mile and a half long. Veteran entertainer Jon Gries certainly fits into that category.

Having first appeared on TV as a ten year-old, and still continuing to produce quality work at age 65, he has built a career that is underrated by many but deserves a ton of acknowledgement.

Jonathan Francis Gries was born on June 17, 1957 in Glendale, California. There wasn’t much doubt as to what young Jon might end up doing when he got older.

Both of his parents were entrenched in the film industry, and it turned out the apple did not fall far from the tree.

Mary Munday was Gries’ mother, who was known for appearing in The Twilight Zone, True Confessions and Ghost Dad, among other movies and TV shows.

Thomas Stephen Gries was Jon’s father, and had a successful career behind the camera as a director and producer. 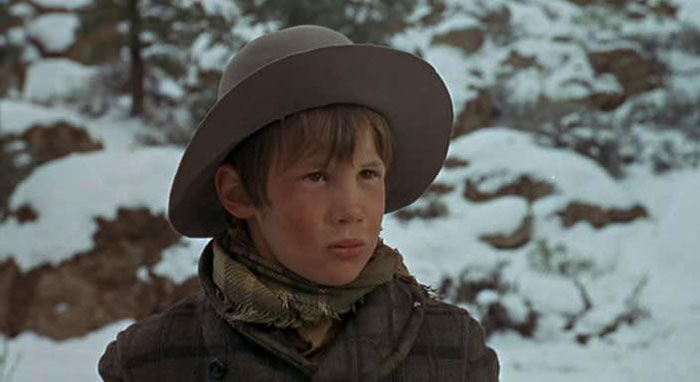 Because of his family’s connection and some luck, Gries did not necessarily need a lucky break in order to enter the acting world.

Before he even became a teenager, the boy had a chance to work with some of Hollywood’s most storied talent.

He was cast as Horace in Will Penny as an 11 year-old, and rubbed elbows with Charlton Heston, Joan Hackett, Lee Majors and Donald Pleasence during the making of the film.

On the Legends and Masters podcast, Jon recounted how he stumbled upon his first role. Jon mentioned that his father took him to the movie studio to get some work done and one thing led to another.

Anyway, so I sauntered out of his office and was walking down the hall and in to the main office building. Two guys walked up to me and they said, Are you here with Tommy? And I said, Yeah. And they said, Come into our office. And it was Walter Seltzer and Fred Engel, the two producers. And they basically sat me down in the chair, and they started talking to me and then, of course, realized that, oh, you’re his son. They thought I was a kid there to read. They didn’t know that I was his son because they’ve never met me before. I’d never met them before.

And so they started asking me all kinds of questions, and they offered me a Coca Cola, which at that time I was not allowed to have. They were asking me questions about girls, about school, about sports, whatever. And I was happy to have an audience just to sit and chat with somebody.

So, long story short, they called him in and said, Tommy, we got the kid. And he came running in. No way. He’s my son. He’s not an actor, he’s an idiot. Oh, man. But they convinced him to screen test me. And I guess there was some believability because I didn’t know how to act. I just knew how to be the person, I guess. 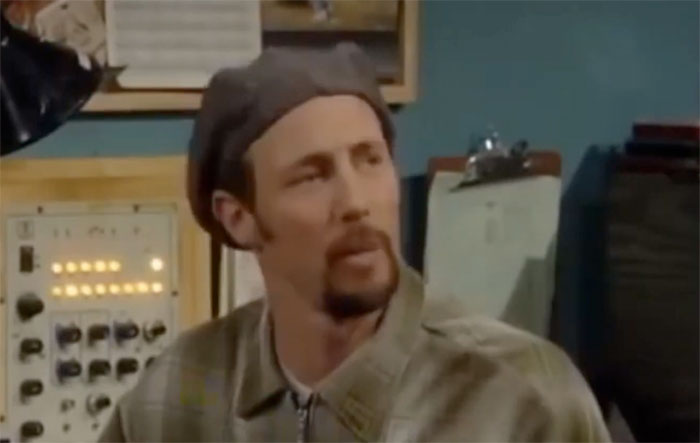 As a young man, Gries would have the chance to appear in memorable shows from the 1980’s such as The White Shadow and The Jeffersons.

However, his first opportunity to be a consistent part of a  television series came in 1992, when he played Shawn McDermott in 54 episodes of Martin.

McDermott was a radio station manager during the first couple seasons of the sitcom. 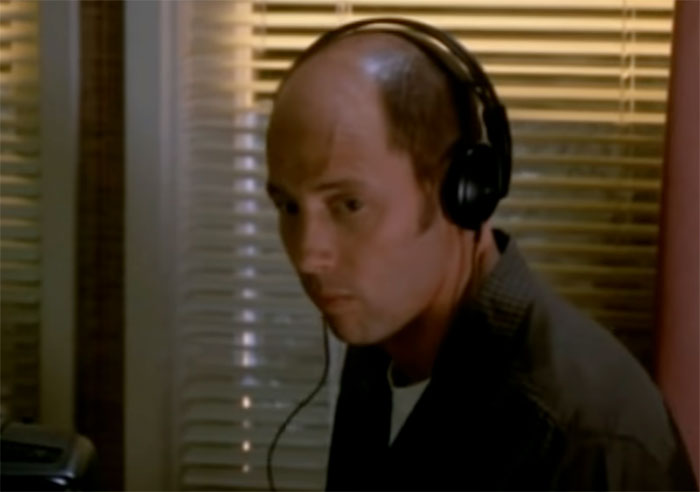 While his recurring role on Martin was certainly notable, Gries’ presence on The Pretender was the longest lasting and perhaps the most integral of any series role in his career.

The actor from Glendale was present for 82 episodes, playing the role of Broots. He is portrayed as a technical whiz whose acumen and knowledge proves to be invaluable with the goal of tracking down the show’s main character. 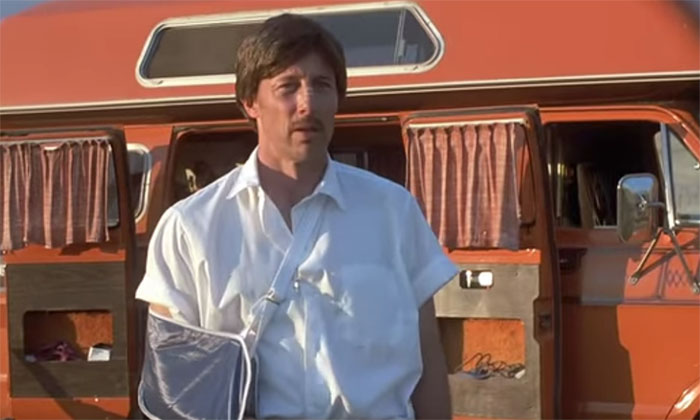 His TV star work would pale in comparison to the recognition he received in the 2004 film Napoleon Dynamite, where he played the memorable character Uncle Rico.

Rico was a quirky individual who spent a lot of time reminiscing about the potential he had in his younger days.

He serves as the caretaker to Napoleon and his brother Kip after their grandmother gets hurt. He also tries to involve the boys in unusual business schemes.

The film intimates that Napoleon tolerates his uncle because he has to, while Kip seems to like Rico a little bit more than his brother.

Jon described how he got the role of Uncle Rico on the Legends and Masters podcast. He mentioned that at the time he was going to quit acting and move into the producing and directing side of business.

And so they were almost done cutting the movie, and Jordy Whites was now working with Jared Hess on Napoleon Dynamite, and they put out a few offers to people to play Uncle Rico. And nobody, I think, even read it because it was such a really independent movie, very hard to get people to read scripts.

…And so he called me and said, hey, I don’t think you’re going to want to do this. They don’t have any money. And I don’t know who these people are. I don’t know anything about them. And I said, well, I’m going to read it because I like the underdog. I like people that are struggling to get by. I made most of my bread and butter and independent films. I read it, and by page 16 or 15, I was laughing out loud. And I called him back and I said, you tell them I’ll show up and I’ll drive myself there. And that was it. And then I did about the job.

And talking about the script, Jon mentions there was no improv and it was 99% written.

Number one, I thought, gosh, if this guy knows how to direct, this is going to be really well. Because one thing I could definitely discern is a good script. And this script is so beautifully crafted.

And it’s a testimony to Jared Hess’s talent that people to this day, whenever we do screen the film and people come and they ask, how much improv? And we’re like, 99.9% scripted. There might have been a couple of words here and there that were improvised, but nothing worth talking about. The script was so crafted that it was beautifully written. 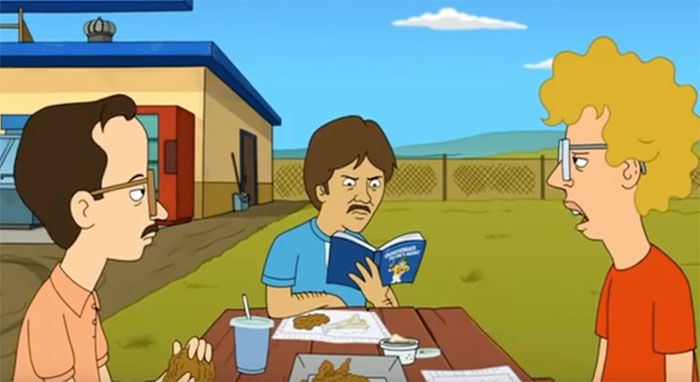 Jon Gries reprised his role as Uncle Rico in the short lived Napoleon Dynamite tv show, which only aired for 6 episodes.

Jon mentions that he did not like that role because of the way the producers wanted him to play Uncle Rico in a more ‘loud’ fashion.

I felt like everybody got to be themselves and be in their normal voice. And for whatever reason, they wanted Uncle Rico to be really loud. And so I never got to speak as Uncle Rico. Uncle Rico, to me in the cartoon, was always like he was always talking like that. He was always like I hated it.

And I even had friends who knew me for years. When they would see the cartoon, they’d say, Was that you doing it, or was that somebody else?

And I really was not happy doing it. I got to be honest. If Jared has hears this, he’ll have to just kind of grin and bear it. But I did not like doing the cartoon. I loved getting together with everybody, and I loved being in that group because we love each other. We are really like a family. But I was not happy creatively at that time at all. 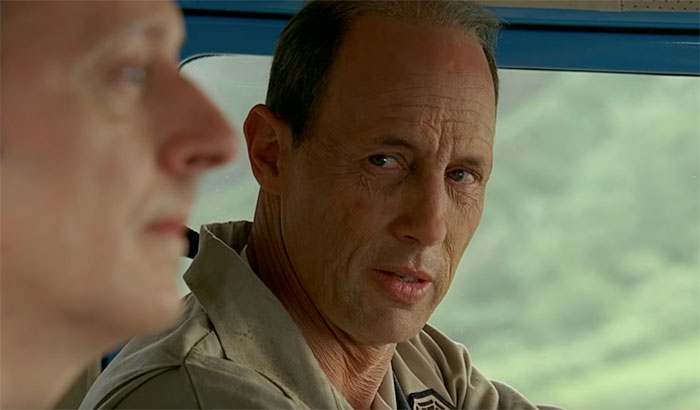 Appearing in six episodes of Lost as Roger Linus, Gries played an unhinged father that was involved in many adventures.

Linus was an abusive father towards his son Benjamin(played by Michael Emerson). Matters were made more complicated when Roger’s wife Emily passed away almost immediately after delivering the child.

Benjamin would end up killing Roger off with toxic gas during the year of the Purge, perhaps in a justified yet cruel full circle karma event for Roger’s actions many years earlier.

While Liam Neeson gets most of the acclaim in the Taken movie series(and rightfully so), Gries plays retired agent Mark Casey in three movies.

He has varying levels of involvement in each film, but is one of Bryan Mills’(Neeson) most trusted confidants.

In Taken 3, Mills is faced with a conundrum when he is accused of murder, and needs Casey’s help to prove his innocence. 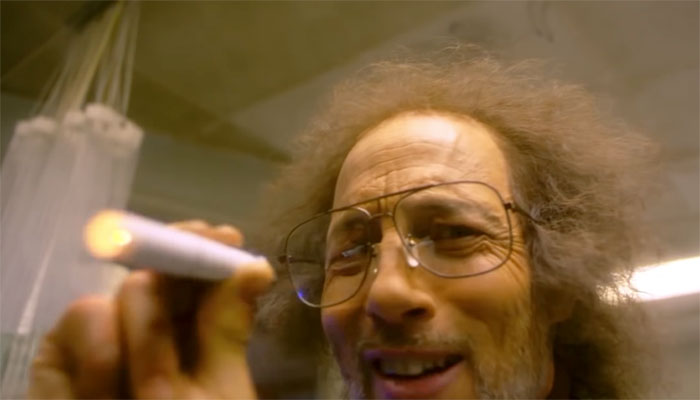 There are certain actors who find themselves burnt out or turned off by too many opportunities, but Jon Gries does not seem like he is one of those people.

He’s currently involved in a couple of projects that are in pre-production called The Knife Thrower and The Myth of Mathew.

Within the last several years, he has had roles in high profile streaming shows such as The White Lotus and Dream Corp LLC.

In the latter show, he plays a loony professor who is convinced that he can analyze the meaning of his patients’ dreams. 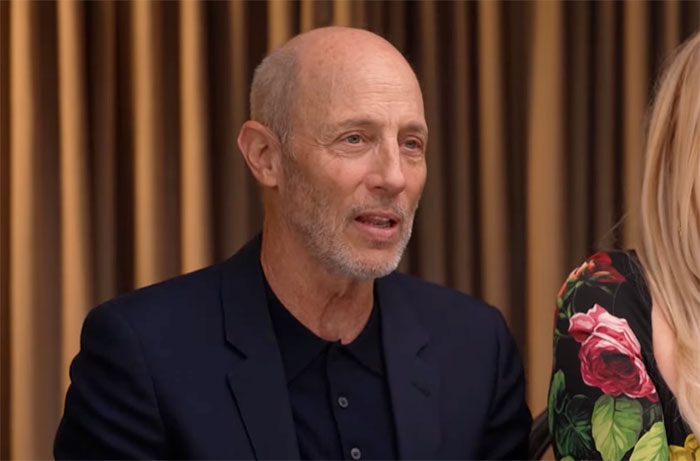 In 2021, Jon was cast as Greg in the HBO comedy series, The White Lotus. The series revolves around a group of wealthy people staying at a luxurious resort, when things take a turn for the worse.

The series is critically acclaimed and has won ten Primetime Emmys and has been renewed for a second season.

Jon Gries has never been married and has no known children. He did have a girlfriend several years ago named Kimberly Rose McConnell, who also works in the cinematic world.