Peter Jackson’s The Lord of The Rings is considered by many to be the perfect trilogy. That doesn’t mean that the films don’t have a few production mistakes here or there.

Here are five “whoopsies” from the iconic fantasy films.

The Car in the Countryside

This has to be the most infamous mistake from the trilogy. It’s been around since the release of the first movie but it’s still one of the best. The moment takes place when Sam and Frodo reach the edge of the Shire and Sam remarks that if he takes one more step, he will be the farthest away from home that he’s ever been. Frodo inspires Sam with some encouraging words from Bilbo and the two continue on their journey.

But if you look in the background, you can clearly see smoke from a car and the reflection of a windshield. Peter Jackson confirmed the existence of the vehicle and it was later digitally altered to look more like a chimney.

Cars would have made the journey a whole lot easier, until they ran into a troll toll.

Tracks on the Path 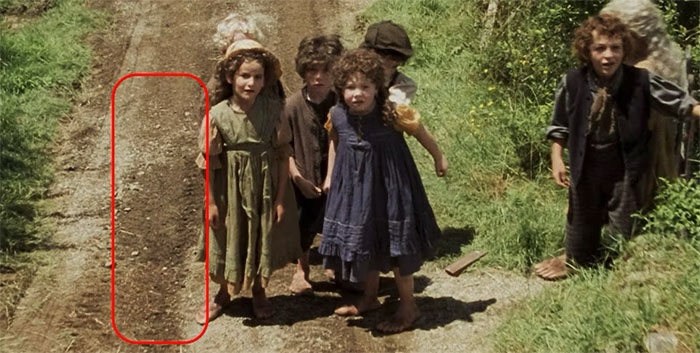 This one’s an innocent mistake in an innocent scene. Gandalf rides by on his cart and the children of the Shire run out to meet him. The little ones beg for fireworks, and you can clearly see tracks left by one of the crew’s vehicles. The tracks must have gone unnoticed because it wouldn’t have taken too much effort to fix the problem before filming the shot.

Ultimately, the scene worked out great and most people will be too distracted by Gandalf and the hobbit toddlers to ever notice the mistake. Still, someone clearly misunderstood when they were told to “keep track” of the shot. 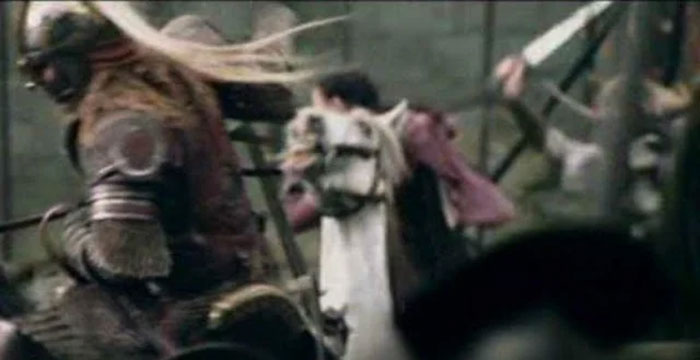 Peter Jackson was concerned that audiences would forget about Aragorn and Arwen’s relationship if we didn’t see the couple together for the entirety of The Two Towers. So he had entire sequences scripted and filmed featuring Liv Tyler escorting the elves to Helm’s Deep. In the end, however, Jackson decided to cut the storyline because it was too much of a departure from Tolkien’s work. Instead, he opted for the dream sequence that makes it into the final film.

However, Arwen would not be removed so easily. If you play this scene in slow motion, you can see the elf on horseback cutting down some Uruk-hai after Eomer and his men turn the tides of the battle.

We can forgive Isildur for failing to destroy the ring, but this is too much.

In the prologue to the first film, Isildur is betrayed by the ring. It falls off him when he is trying to escape an ambush and he is killed when revealed.

If you pause the moment and brighten the shot you can see that Isildur is wearing modern hiking boots. The scenes of the prologue were filmed over rough terrain and the grips were probably necessary for the actors to move around. The person in charge of costume design clearly didn’t know that Isildur and his boots would be going bottoms up. It’s a small mistake that’s hard to notice unless someone points it out to you. The prologue is otherwise perfect, so haters can take a hike.

“And the sword perceived its time had now come. It abandoned Eomer…” – Galadriel

In this moment from the Two Towers, the horse master Eomer of Rohan gives our heroes horses to ride and a parting message. He warns them not to trust to hope for “it has forsaken these lands.”

But as he rides off, it’s his sword that has forsaken Eomer. It can be seen falling out of its sheath, barely hanging on. The top comment on the scene’s video adds some hilarity to the moment:

This is one of the more noticeable gaffes in the three movies, but it’s pretty damn funny. Fans are willing to forgive these production mistakes because The Lord of the Rings are well-made movies with a strong, overarching story. Game of Thrones season 8 didn’t have this high level of quality and fans were less forgiving of the infamous coffee cup.

That wraps up our list of some of the biggest on-screen mistakes from The Lord of the Rings. Stay tuned for more breakdowns, updates, and hot takes.

He Played 'Pippin' in The Lord of the Rings Trilogy. See Billy Boyd…'The One' Reason Fans Rejected The Rings of Power But Loved House of…The Best Sci-fi Movie You’ve Never SeenThe True Story of Why James Cameron Tried To Disown His First MovieLeonardo DiCaprio’s Worst Movie Is So Terrible It Has a 0% Rotten…Rachael Leigh Cook Says It Was A Huge Mistake To Pass On This…Michael Caine’s Worst Movie Is So Terrible It Has a 0% Rotten Tomatoes…Every 'Scream' Movie Ranked from Worst to BestKang Will Kill Thor? Insane New Theory About The Next Thor Movie