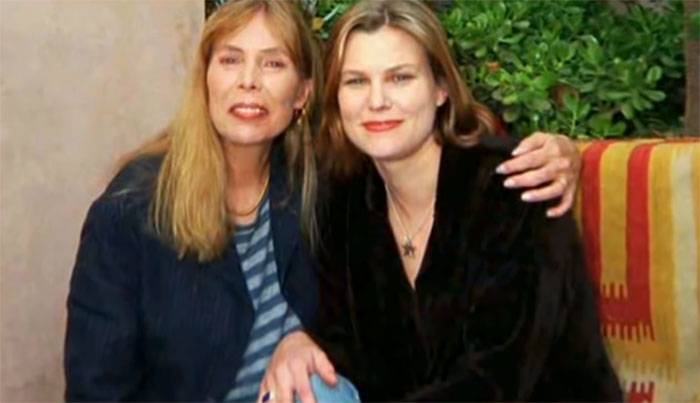 Kilauren Gibb was born Kelly Dale Anderson in February 1965 in Toronto, Ontario. She is at the center of a famous adoption story that has been a mystery for over 30 years. She often struggled with complex Canadian adoption laws to discover her birth parents, only to be surprised at who her parents really were.

Who are her adoptive parents?

Kelly Dale Anderson was given up for adoption shortly after birth and was adopted by David and Ida Gibb. She was raised in Don Mills, a suburb of Toronto, and attended private schools and dined in country clubs. Bother’s parents were teachers.

However, she was unaware of who her birth parents were and would eventually seek information behind her being given up for adoption.

Who are her biological parents? 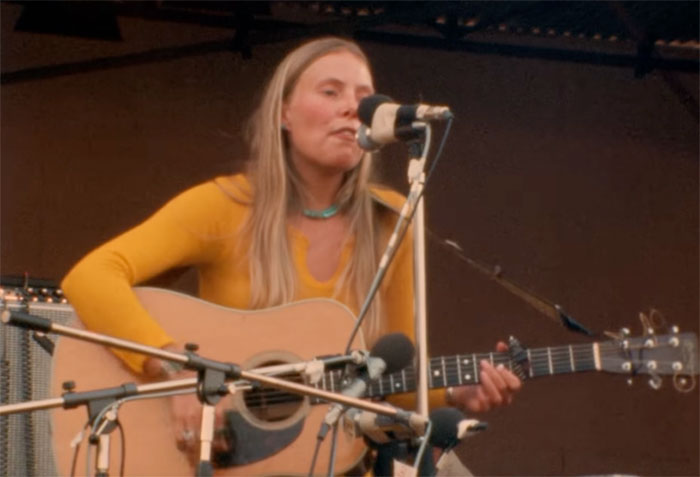 Kelly Dale Anderson’s biological parents are Joni Mitchell and Brad MacMath. Joni Mitchell was born Roberta Joan Anderson in Fort MacLeod, Alta., and was raised in Saskatoon. While studying art at the Southern Alberta Institute of Technology in Calgary, she met Brad MacMath, a photographer. She became pregnant in 1964 and moved to Toronto.

Why did Joni give her up for adoption?

Joni had chose adoption at the time because of issues of poverty, the stigma of woman giving birth out of wedlock and the unwillingness of the biological father to take on the role of a parent. Joni mentions in an interview that she gave her daughter up for adoption because she was destitute at the time of her pregnancy.

To survive, Joni would give up Kelly for adoption. She would move to Los Angeles with Chuck Mitchell, whom she would marry for a few years.

In a dramatic twist of irony, Joni Mitchell’s career would explode within three years, but by then, the adoption had been closed, and records had been sealed.

Furthermore, interviews with Joni Mitchell’s parents suggested they would have aided her had they known of the pregnancy.

Joni categorically denies the claim that she gave up her daughter to focus on and advance her career. She says in an interview that she had no career at the point in her life and was just struggling student in art school at the time.

There was no career. My music at that point, first of all I was just a folk singer you know…. I had a nice voice I guess, I played okay you know, but there was no real gift…..it was just something that was happening and was gonna die out soon you know. It was a way to get money to smoke, you know and have a pizza and go to a movie and to bowl.

Kelly Dale Anderson began modeling as a teenager and was featured on the cover of Chatelaine magazine in November 1983. She also took courses at Harvard University in Boston and the University of Toronto. Kelly has claimed she did not know she was adopted until she was 27.

The search would prove frustrating due to Canadian adoption law and only being given scant details about their identities, but nothing definitive.

When and how did Kelly and Joni reunite? 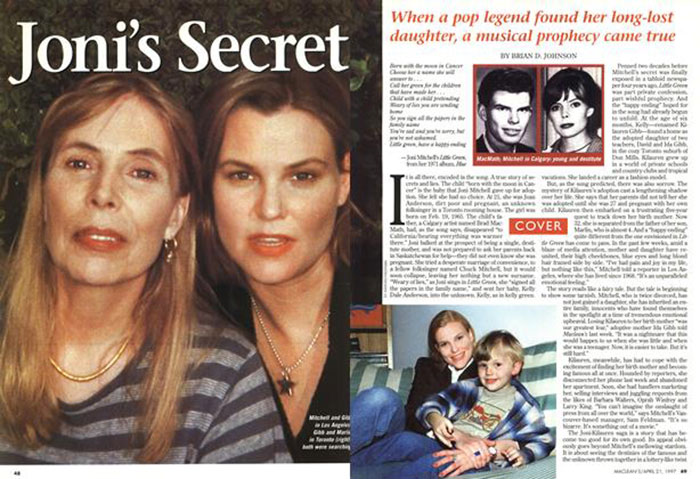 The reunion of Kelly and Joni was an example of the power of the internet. The reunion happened in Los Angeles in 1997, but the process had begun five years earlier. It wasn’t until some Joni Mitchell fans posted information online about the circumstances behind Joni giving up a daughter for adoption that Kelly was able to piece together their relationship.

Mother and daughter reunited in 1997 when Kelly was 32 and Joni was 54. Kelly mentions that she met Joni for the first time in her kitchen and she hugged her and says it felt like ‘I had gone away on a trip for a couple months and I was coming home."

There was another surprise for Joni, as Kelly had brought her 4-year-old son Marlin with her.

What is Kelly’s relationship with her mother like now? 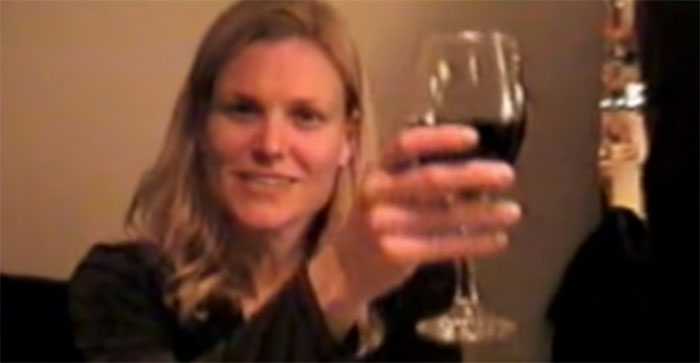 Regrettably, the joy of the initial reunion would eventually sour. Within four years, trauma would erupt within the relationship between Joni and Kelly. From the Joni Mitchell archives: “In January 2000, Ms. Mitchell allegedly slapped Ms. Gibb during a quarrel in which police were called to the singer’s $9-million Bel Air villa in Los Angeles. Ms. Gibb, who called for help, refused to press charges but wanted the alleged assault reported. A Los Angeles Police Department report states officers were there to investigate a ‘battery.’”

As to how things are in the relationship now in 2022, it is hard to say. Not much information about their relationship can be found after this window of time.

What does she do for a living?

Information on what Kelly Dale Anderson does for a living outside of the mentioned information in articles about her search for her mother is rare. The best update we can provide on what she does is that she had her paintings of landscapes on display in 2015.

Kelly Dale Anderson has had a troubled relationship with Edward Barrington, whom she had met in 1979 as a teenager. They would have an on-again, off-again relationship after the dissolution of Kelly’s first marriage to Paul Kohler in 1992.

Kelly had dated Kohler for two years before marriage. Kohler was a Toronto-based talent agent. They would split in 1995. Barrington would re-enter her life. He would also be there when Kelly reunited with Mitchell in 1997.

A few months later, Barrington would propose. She would become pregnant in 1998 and give birth to Daisy Joan in 1999.

The relationship and the legal dispute are messy and complicated but are detailed here.

Kelly Dale Anderson has two known children, though her private nature has made it difficult to confirm if she has any other children. Those children are Marlin and Daisy Joan.

For those who want to know more about Kelly Dale Anderson / Kilauren Gibb, she is on social media, but she is also reasonably private. While she does have an Instagram account, it is private. She can also be found on Facebook. She also has a Twitter account but has not posted since 2013.