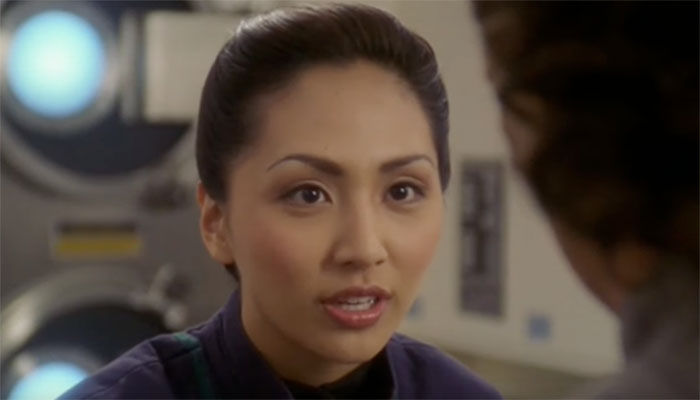 Linda Park is an actress who is best known for her role as Ensign Hoshi Sato on Star Trek: Enterprise. What has she been up to since her time on Star Trek?

She was born on July 9th, 1978, in Seoul, South Korea. Her mom left her dad and took her to the United States because they were living in poverty and she wanted a better life for her daughter. They moved in with Linda’s grandmother and aunt in a tiny apartment in Milpitas.

She acted in her first play, The Phantom Tollbooth when she was 8 years old at a community theater.

Linda mentions that she and her mom fought often about her wanting to act. Her mother protectively wanted her to be a lawyer and told her that there were no roles for Asians in the movie industry. Against her mother’s wishes, she persisted and continue to push forward with her passion for acting. 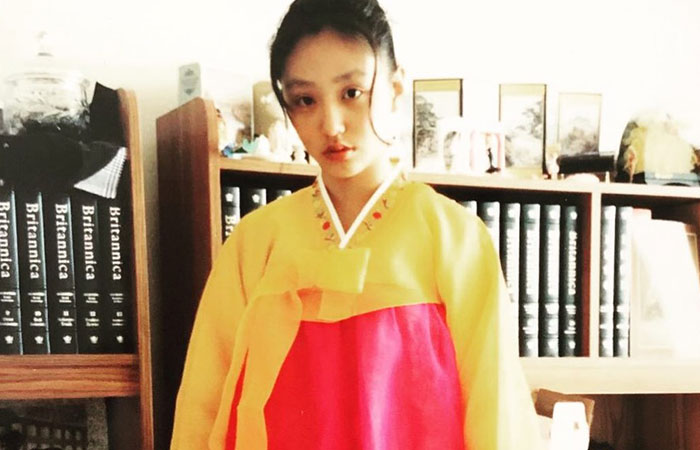 When Linda was in high school, she saw the movie Double Happiness, which starred Korean actress Sandra Oh and is about an Asian woman who wants to be an actress, but also wants to be a dutiful Asian daughter who makes her parents proud. Seeing that Sandra Oh could be in a movie really inspired Linda and made her believe that acting could be a real possibility for her.

Linda said she got in a lot of fights in high school because people would try to bully her and say racist things. Her parents would end up sending her to an all-girls Catholic school, Notre Dame High School, where she would lean more into her passion for acting.

She was involved in the drama and theater department and would build a black box theater with a regional theater director.

While working on her Bachelor’s in Fine Arts she spent time abroad, doing a semester in England at the Royal Academy of Dramatic Art and the London Academy of Music and Dramatic Art before graduating in 2000 from Boston University.

While still in college Linda was in productions of Cyrano de Bergerac, The Trojan Women, Richard III, Mad Forest, and Lysistrata. Park was one of the lucky ones and started working the year after she graduated. Her first role in 2001 was on the show Popular, which she followed up in that same year with Jurassic Park III, and immediately after snagged a coveted role on Star Trek: Enterprise.

Though not the most popular film in the franchise, when a major title like Jurassic Park needed someone to play Hannah in the release of the third movie in the original set, Linda Park was there. We’d rather be in the least liked installment than not in one at all. 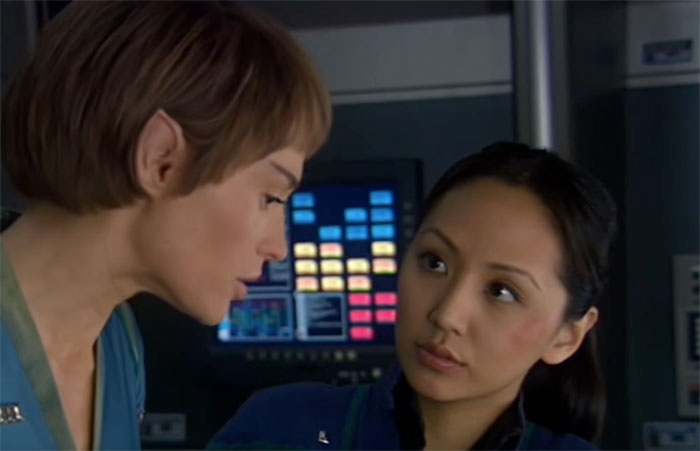 Following her appearance in Jurassic Park III, Linda landed the role of Ensign Hoshi Sato, the linguistics expert, on Star Trek: Enterprise, giving her a spot in two big franchises right at the start of her career. Not too shabby.

Park’s character Hoshi Sato appeared in all 98 episodes across all four seasons of Star Trek: Enterprise’s run. So, you could say she was pretty important to the mission.

Who is the Mirror Universe Hoshi? 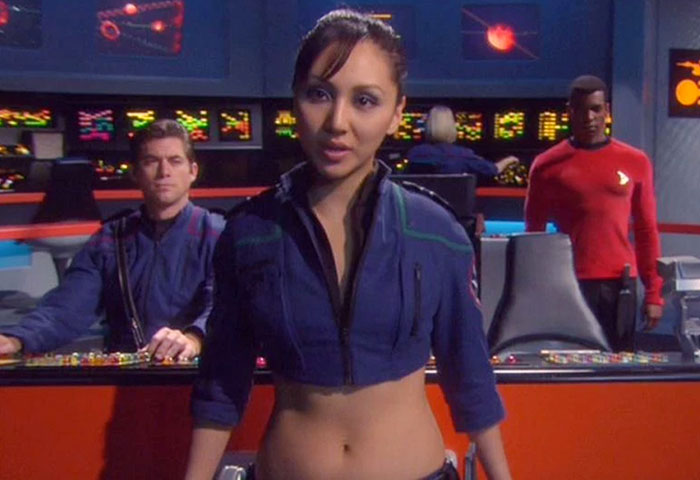 The Mirror Universe is the parallel to the Prime Universe on a different dimensional plane, but existing at the same time. The characters, places, and things are just the mirror opposite of themselves.

So, lovely Hoshi from the Prime Universe is a cunning, manipulative version of herself that becomes Empress Sato in the Mirror Universe. She rules for over a century by cloning her original self, until Sato III and her empire are wiped out and Emperor Spock takes over.

Linda considers her time on Star Trek as a huge learning experience. She had only been behind the camera on two occasions before her stint on Star Trek.

She says she learned a lot from Scott Bakula and she considered him a mentor on the set. She also credits John Billingsley with helping her out as well.

Linda mentions that seeing people’s deep connection to the show is rewarding and that it reaffirms that what she is doing really matters.

What is Linda Park doing now? 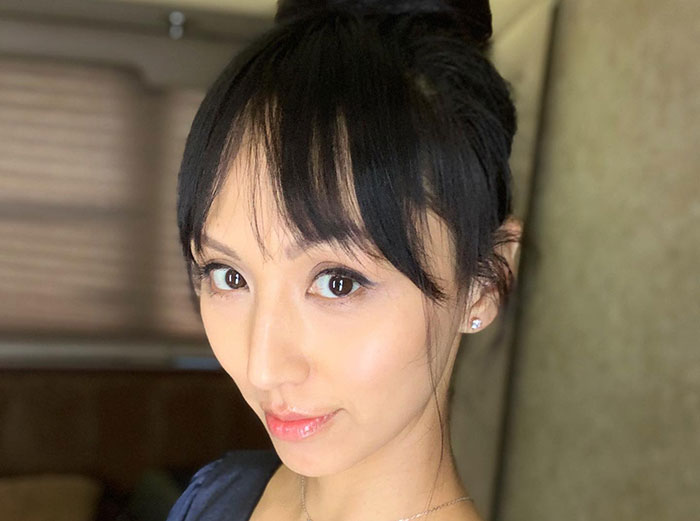 Since Park’s departure from space, she’s been in a good mix of television shows and movies. Steadily working, her last role was in the 2021 animated series Fairfax. She has a pilot for the dark comedy Dangerous Moms completed, and hopefully we’ll see it soon on NBC.

She is also pretty busy being a mother, accomplished dancer, co-founder of the Underground Asylum Theatre Company, and board member of the Antaeus Theatre Company. Whew! Is that all?

She has also been in quite a few Star Trek documentaries if you like those.

While Park is flourishing on screen, she wants to branch out and try new adventures. She is currently working on getting her first script, Chopsticks in the Land of Cotton, into production.

The script, based on the 2008 book by Professor John Jung, follows a Chinese family in the Mississippi River Delta in the 1870s. The script was a finalist in The Golden Script Competition.

Sometimes it pays to have a hunky celebrity be a fan of the franchise you are acting in. For Linda Park, that meant dating Star Trek superfan Tom Hardy, who had a role in one of the movies himself in Star Trek: Nemesis. The pair dated from 2003 until 2004. 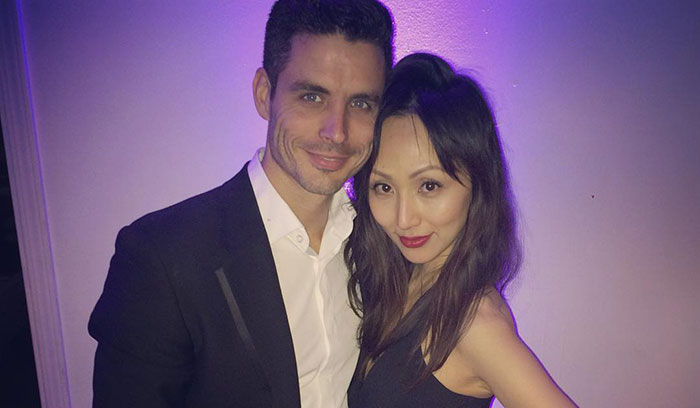 In 2014 Park married fellow actor Daniel Bess. Bess is best known for his appearances in 24 and Last Resort.  His most current role is in the movie The Requiem Boogie, which is in post-production. 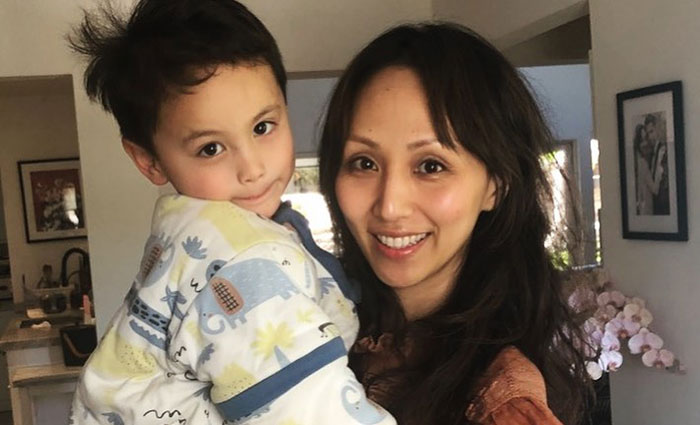 Linda and her husband Daniel have one child, Cassius Park Bess, who was born in June of 2018.

After Park started feeling extremely sluggish and constantly tired at the young age of 18, her mother took her to do a battery of tests and she came out with a diagnosis of the autoimmune disease lupus.

A change of diet, meditation, and a spleen removal helped Park to regulate her symptoms and feel at her best. Now in her 40s, Park says it’s all about listening to your body, looking at the labels of anything you put in your body or on your skin, and accepting yourself as you are.

Linda is the first Asian actress to ever play the part of Maggie the Cat in Cat on a Hot Tin Roof, in a professional production. Linda discovered the play after watching Sandra Oh, perform monologues from the play in the movie Double Happiness.

Linda volunteers at The Antaeus Theatre Company and helps at-risk youth become better citizens by teaching them Shakespeare. About the program, she says ‘We teach them how to write. We teach them about the healing ability that art has to express all the pain and poison inside your body so it doesn’t kill you or kill somebody else.’